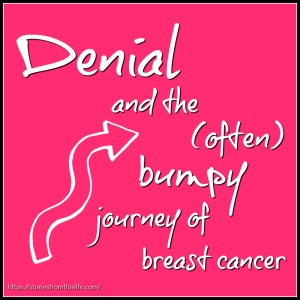 When I was first diagnosed with breast cancer in 2004, I found out just how powerful denial can be. Even though both my husband and I had heard the surgeon relay the results of the biopsy, I became convinced that I had misheard her. My mind spun all sorts of scenarios about how the biopsy results were mistaken, or perhaps they just had the wrong girl.

Well, I unfortunately was the one who was mistaken, and my swimming into the depths of denial only delayed my acceptance of the diagnosis.

And now in 2016? My brain still resorts to it. Seriously. You would think I would know better by now, but evidently not.

When the lesions first began appearing on my breast, I was convinced it was simply an infection caused by a cat scratch. Although my general practitioner was dubious, she let me take antibiotics to see if it healed. It didn’t.

Even as I sat in the surgeon’s office back in July, I was still telling myself it was simply an infection. Perhaps it wasn’t healing as I had had radiation treatment to that area in the past. Perhaps.

The surgeon was sure from its appearance, however, that it was indeed cancer. Not a recurrence, we discovered, but a brand spanking new type of cancer, inflammatory breast cancer.

Thanks PTEN for all the tumors that you have brought me.

Anyway, even after this latest cancer diagnosis, I was evidently still operating under the influence of denial. Or maybe just a faulty assumption. As the initial scans only showed the possibility that one lymph node might be involved–and at the time they strongly suspected the punch biopsy might be the cause of the swelling–I believed that the surgery and lymph node biopsies would find that I was only Stage 1.

I never directly asked the surgeon or the oncologists what stage my cancer might be.

If you know me personally, you know I love to do research and know as much as possible about a topic. It is rather odd for me to behave this way, but I did.

And now, today I had my final appointment with the surgeon before my bilateral mastectomy surgery on December 13. The swelling of my breasts has decreased dramatically since the chemotherapy, and so she was able to do a full breast exam as well as feel the lymph nodes. At least two were swollen, and so she confirmed on ultrasound that these most likely were cancerous.

Apparently when the skin is involved in breast cancer, as in inflammatory breast cancer, it’s automatically Stage 3.  I realized how I had been operating the entire time on yet another faulty assumption. And now, I have to tell my friends and loved ones that my cancer is considered more advanced than I ever realized.

Denial can be a powerful coping mechanism, even for those of us who should know better. And it simply makes the journey to better health even more bumpy than it should be.

I’m still trying to wrap my head around the Stage 3 diagnosis. I guess I have a week or so to get used to it as I wait for my surgery. This year has been a rocky road indeed.